Once the State of Minnesota was created in 1858, the legislature created counties as settlement took place.

Clay County, located along the west border of Minnesota, was established in 1860 as Breckinridge County, named for John C. Breckinridge, Vice President of the United States from 1857-1861.

After the Civil War started, Breckinridge joined the army of the South. Pressure by Minnesota residents resulted in the State Legislature of Minnesota passing a bill on March 6, 1862, rescinding the name of Breckinridge. The county was then renamed for Henry Clay (1777-1852). Clay was known as a statesman and orator, and called "The Great Pacificator".

In 1871, the Northern Pacific Railway reached Clay County and settlers began pouring in.  Through the winter of 1871-1872, crime was a major problem.  Since no organized government existed, citizens petitioned for permission to form a county government.

On February 27, 1872, the Legislature declared Clay an organized county and instructed the Governor to appoint three County Commissioners within 10 days. Governor Horace Austin failed to follow through until April 14, 1872 when he appointed two Commissioners, Peter Wilson and Andrew Holes.  Wilson and Holes took their oaths of office on April 25 and “entered upon the duty of their offices.”  The next day they met to appoint a Justice of the Peace, Sheriff, Attorney and Auditor.

April 26th, 1872 is considered the birthday of Clay County as that was the first meeting of the County's Government.

Today, the county is represented by 5 commissioners.

In 1871, a decision was made to have the Northern Pacific Railroad cross the Red River at the present site of Moorhead. The railroad bought Job Smith's land, platted a townsite, offered lots for sale, and named the town Moorhead.

Moorhead was designated the county seat on June 1, 1872, and a county building was built at 5th Street and 1st Avenue North. Today, the fountain in the Moorhead Center Mall is located in about the same spot where the 1st Clay County Courthouse once stood. The first courthouse was sold in 1878.

Read about the battle for the location of the county seat in the article County Seat Fight a Bitter Struggle by Mark Peihl. This copyrighted article first appeared in the September / October 2001 edition of the Clay County Historical Society Newsletter. It is reprinted here with his permission.

Photos and information regarding the early Clay County Courthouses are courtesy of Mark Peihl, Archivist, Historical and Cultural Society of Clay County. 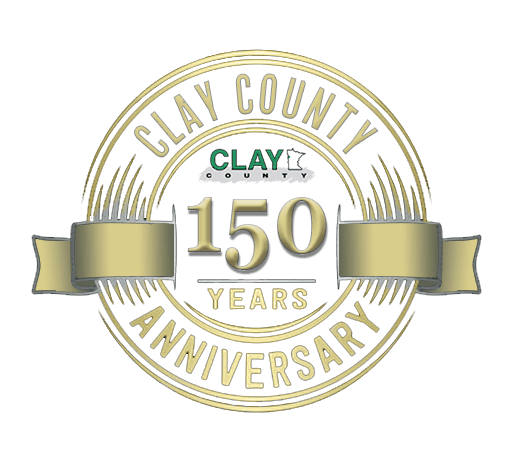